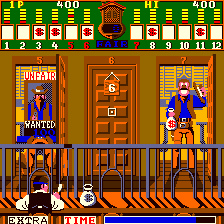 Bank Panic is an arcade game developed by Sanritsu and manufactured by Sega in 1984. West Bank is a clone of the game, released on several platforms. Game description The player assumes the part of an Old West sheriff who must protect a bank and its customers from masked robbers. The layout of the bank is implicitly a circle with twelve numbered doors and the player in the center. The player can rotate to the left or right and view three doors at a time. The doors will open to reveal a customer (who will drop a bag of money, making a deposit), a robber (who will attempt to shoot the player) or a young boy (who will be holding a stack of three to five hats, which the player can rapidly shoot for a bag of money or bonus time). The level ends when all twelve doors have received one or more deposits. This is indicated by the numbered boxes across the top of the screen, with a red dollar sign showing a door with a completed deposit. At random intervals, a bomb will be placed on one of the doors and a rapid timer will count down from 99. The player must move to that door and destroy the bomb with gunfire. Shooting a customer, being shot by a robber, failing to destroy a bomb, or failing to complete the level before the overall timer runs out (shown by a bar at the bottom of the screen) costs the player one life. Although robbers can be shot on sight (an "UNFAIR" kill), greater points can be earned by waiting until they begin to draw their weapons (a "FAIR" kill). A red-shirted robber who is shot at the precise moment of drawing his weapon will earn maximum points and a letter in the word "EXTRA" (indicated in the lower left corner). Completing five such kills finishes the word, earning the player an extra life, bonus points, and instant advancement to the next level. Extra lives can also be earned by reaching certain scores. At the end of each level, the player earns bonus points based on the total number of deposits received, the amount of time remaining, and the average time for all "FAIR" kills during the level. Extra points are also earned whenever a customer makes a deposit at a door where a bank teller is sitting. Later levels introduce variations, including customers who will be shoved aside by robbers; customers who are bound by ropes (shooting them once will destroy the ropes and earn the player three bags of money, while waiting will reveal a robber); robbers who duck away from the door before drawing their guns; and red-shirted robbers who wear white boots (distinguishing themselves from the other red-shirted robbers) who carry two handguns and thus must be shot twice, though even doing so with perfect timing will not earn an EXTRA letter. At times, a robber will take money that has been deposited at one of the doors, making its red dollar sign disappear, and will be hiding behind that door, money in hand. Shooting the robber makes him drop the money, returning the deposit. Clues for the player include the five indicator bars above each door box at the top of the screen. A red bar will descend, indicating a person (customer, robber or boy) is approaching the door. When the player rotates to those doors and the red bar is at the bottom, the doors will open and the player can take appropriate action. Also, after making a deposit, customers turn to leave. They sometimes will be wearing posters on their backs showing a masked face and a door number. This indicates a red-shirted robber hiding behind that door. Earning a high score can allow a player to enter his or her initials in a top ten "BEST SCORE" list, which also records the level the player reached and the length of the game. Due to an odd software bug, this list is only visible when a player is making an entry, unlike the vast majority of arcade games which periodically display the list when the game is idle. The game's background music is a repeating cycle of Dixie. The tempo of the music increases when a player has nearly run out of time.

As a gunslinger, it's your job to protect a bank from bandits while taking care not to shoot innocent customers. The bank has 12 doors in front of 12 teller windows, with only three doors visible at a time. Shooting is done simply by pressing one of the three buttons to shoot the left, middle or right door. The player can move his viewpoint left and right to reveal new doors. People only appear behind the doors that are currently visible on screen, except for the rare outlaws who will pop up to steal a cash deposit from a teller window the player isn't watching. Indicators at the top of the screen show how much time it will take before someone will show up at a door.

If a bandit appears behind a door, you have only a few seconds to shoot him before he shoots you. If you shoot him too early (i.e. before he sticks his gun out at you), it is considered unfair and gives very little score, but if you're too late, he'll shoot you and you lose one of your three lives. Sometimes a bandit will stick dynamite on one of the doors. You must then shoot the dynamite to get rid of it. If you take too long, the bomb explodes (even if it's offscreen) and you lose a life.

If you're lucky, a customer will appear behind the door and deposit a bag of gold coins. If you shoot any of these people by accident, you also lose a life. Sometimes a bandit will suddenly take the customer hostage and replace them in the door.

At other times, a cowboy will appear with a stack of hats. Shooting off all the hats before the door closes grants a cash deposit and a big score bonus. Others will be tied up with rope. If you shoot the rope, there's more money for you, because not only will you receive one bag of gold coins, but you'll get three bags of gold coins.

There are more than ten rounds in Bank Panic, and each one ends when a person behind all 12 doors was able to throw you a bag of gold coins. The rounds get difficult the further you get. For example, in later rounds, a few bandits will block your shot, and you have to then shoot twice. Also, regardless of what round you're on, there is a time limit.